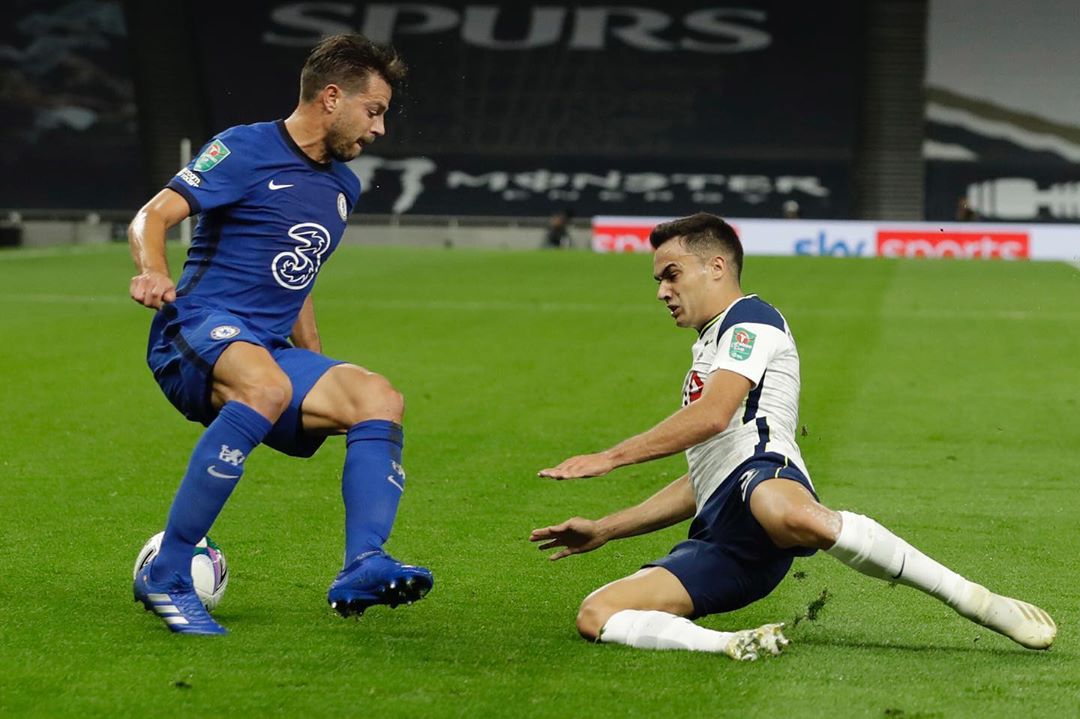 Tottenham defeats Chelsea 5- 4 on penalties in Carabao Cup. A total of nine penalties had been converted before Mount stepped up to take the 10th, but the England midfielder’s effort clipped the post and went wide.

Mason Mount missed the crucial spot-kick as Tottenham edged past Chelsea on penalties after a 1-1 draw to reach the Carabao Cup quarter-finals. Chelsea had dominated the first half and new signing Timo Werner netted his first goal for the club with a clinical finish into the bottom corner.

Spurs responded well after the break and debutant Sergio Reguilon’s side-footed effort from inside the area was pushed over the crossbar by Chelsea goalkeeper Edouard Mendy, who was also making his first appearance for his new club.

Jose Mourinho’s side got their rewards seven minutes from time when Spaniard Reguilon’s cross sailed through to the back post for Erik Lamela to coolly convert from six yards. With no extra time played, the match went straight to penalties and Mount was the only player to miss.

Second-string Spurs advance
Spurs boss Mourinho seemed to dismiss the competition before the game, saying the sheer number of fixtures his side face means he has to prioritise the Europa League as the money from it is “very important”.

An arduous schedule sees Spurs in the middle of a run of four games in the space of eight days.

After drawing with Newcastle on Sunday and getting past Chelsea on Tuesday, further matches follow on Thursday, against Maccabi Haifa in Europa League, and on Sunday, when they meet Manchester United in Premier League.

But Mourinho will be delighted at scraping through against his former club, where he had two spells as boss and won three Premier League titles. Mourinho was brought in as Mauricio Pochettino’s replacement last November with the aim of securing a long-awaited trophy – their victory in this competition back in 2008 being their most recent silverware.

The returning Gareth Bale remains unavailable through injury but fellow new boy Reguilon, whose mistake led to Chelsea’s goal, improved as the game wore on, showcasing his electric pace and ability to create a goal.

The wing-back was a constant outlet down the left in the second half and it was he who picked out Lamela for the leveller. That came soon after a bizarre moment in the second period when defender Eric Dier sprinted off the pitch and straight into the dressing room, followed quickly by a furious-looking Mourinho, before both re-emerged a couple of minutes later.

It subsequently emerged that Dier had desperately needed the toilet. Dier, Lamela, Pierre-Emile Hojbjerg, Lucas Moura and Harry Kane all converted their spot-kicks to help Tottenham through to the next round, which takes place in December.

“I am very proud of the players, even the ones not on the pitch,” Mourinho told BBC Radio 5 Live. “This is a unique situation that we go through and we still go through. Everything was about the spirit of my players.

“I don’t want to believe that we have another week like this one, but now this competition is in the pocket until December. “Mentally this win gives us a lift. The feeling is good, on Thursday we have fresh players and I hope they can give us what these boys gave us tonight.”

Chelsea new boys impress Lampard’s debut season as Chelsea boss was a relatively successful one, finishing in the top four and reaching the FA Cup final where they were beaten by rivals Arsenal.

But the remit has changed this season after spending over £200m on new signings, but exiting this competition means one less opportunity for a trophy at the end of the campaign.

Germany striker Werner, who netted 34 times last term, opened his account for the Blues and he showed signs of an emerging understanding with left-back Ben Chilwell, who was given his first start after joining from Leicester for £45m.

Mendy, a £22m acquisition from Rennes, has been brought in to solve the club’s goalkeeping problems and turned in a steady performance, coming confidently off his line to claim catches and making good stops to deny Reguilon and Lamela.

The Blues have failed to win their past two league games, hitting back for a 3-3 draw against West Brom and being defeated by Liverpool, so Lampard will need to start picking up results quickly with owner Roman Abramovich closely monitoring proceedings after his summer outlay.

“The first half was as much control as you can have in a game of football,” Lampard told BBC Radio 5 Live.

“I keep saying the same thing but there’s no doubt that if you look at our first-half performance and some of the great stuff we did, that’s going to keep coming.

“To sustain that for 90 minutes with the fitness we’ve got is hard – you can see they were dead on their feet at the end. Tottenham had an extra two weeks of pre season. That’s a tough challenge but I can’t be unhappy with a lot of the performance.”

Lampard’s hold on Mourinho – the stats