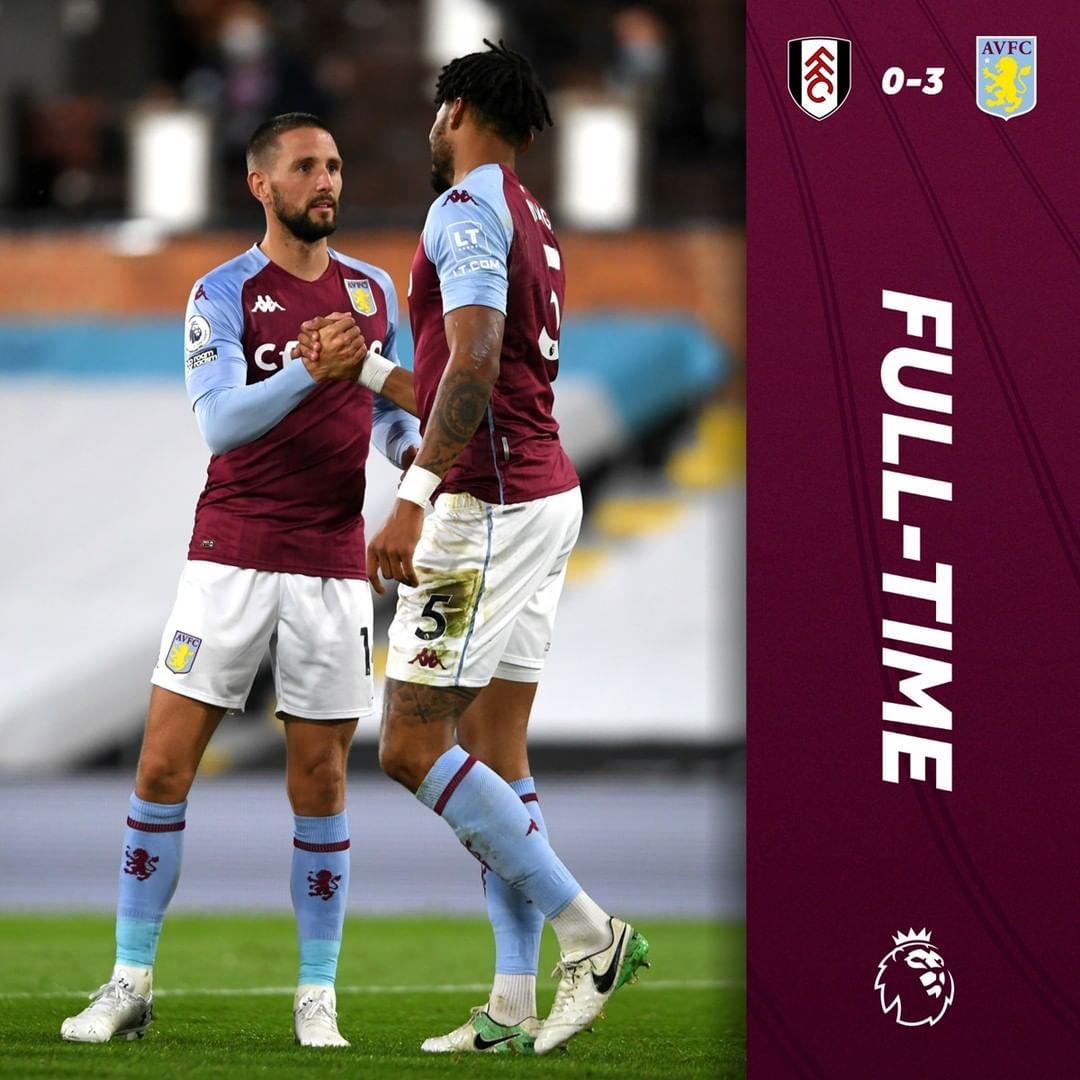 Jack Grealish put them ahead with a shot on the bounce after John McGinn’s clipped ball over the top caught Fulham out. Conor Hourihane doubled their lead when McGinn laid the ball into his path.

And Tyrone Mings wrapped the game up early in the second half when he snuck in behind a high Cottagers line to stab home Hourihane’s free-kick – Villa’s third shot on target of the game.

That means Fulham have conceded 10 goals in their opening three games, which would have been a joint-record in Premier League history – if West Brom had not conceded 11 this season.

Fulham had a Bobby Decordova-Reid goal disallowed after a video assistant referee review for a foul, but that was one of their few clear chances at goal. Villa stayed up last season thanks to eight points in their final four games. Dean Smith’s side have carried that good form into this season with four wins from four games, including two in the Carabao Cup.

They will face much tougher tests than this one though.

Villa were clinical and scored with three of their five shots on target, all the result of good play. BBC Radio 5 Live’s Matt Upson called the link-up play between McGinn and Grealish for the opener “almost like telepathy”.

The second came from a nice passing move as Grealish found McGinn, who passed to Hourihane, with the midfielder slotting into the bottom corner. That was the earliest Villa have gone 2-0 up in a Premier League game since May 2011 – and the first time McGinn has set up two goals in a game for Villa.

Dean Smith’s side did not create too many clear opportunities, but still managed a third goal. Mings had the freedom of the penalty area to tuck home a left-wing Hourihane free-kick.

They never looked back and move onto six points from two games.

The unusual 17:45 BST kick-off time was so it did not overlap with the late game between Arsenal and Liverpool, which was changed so it was finished before pubs have to shut in England at 22:00 BST. Fulham are only the fourth team to concede at least three goals in each of their opening three Premier League games – following West Brom this season and West Ham in 2010-11 and 2017-18.

Scott Parker tried a five-man defence instead of his usual back four, but it did not work. Perhaps the problem is the personnel and not the tactics. Only one of their starting line-up – Ivan Cavaleiro, with Wolves in 2018-19 – has ever played in a Premier League team who have not been relegated.

There are a combined 10 Premier League relegations in 11 seasons (six with Fulham and four with other teams) among the rest of the team. They were sloppy for all Villa’s goals and their attacking tactics were one-dimensional.

They thought they had a goal when Decordova-Reid pounced after Emiliano Martinez spilled Aboubakar Kamara’s shot. But after viewing the screen, referee Stuart Attwell decided Mitrovic had fouled Konsa as the first shot came in.

Bryan went close late on when his shot was tipped onto the bar by Martinez. Parker will have to go back to the drawing board again if Fulham are to stay up this season. The transfer deadline is in a week’s time.

Both these sides are in Carabao Cup action against Championship sides on Thursday, before Premier League matches on Sunday.