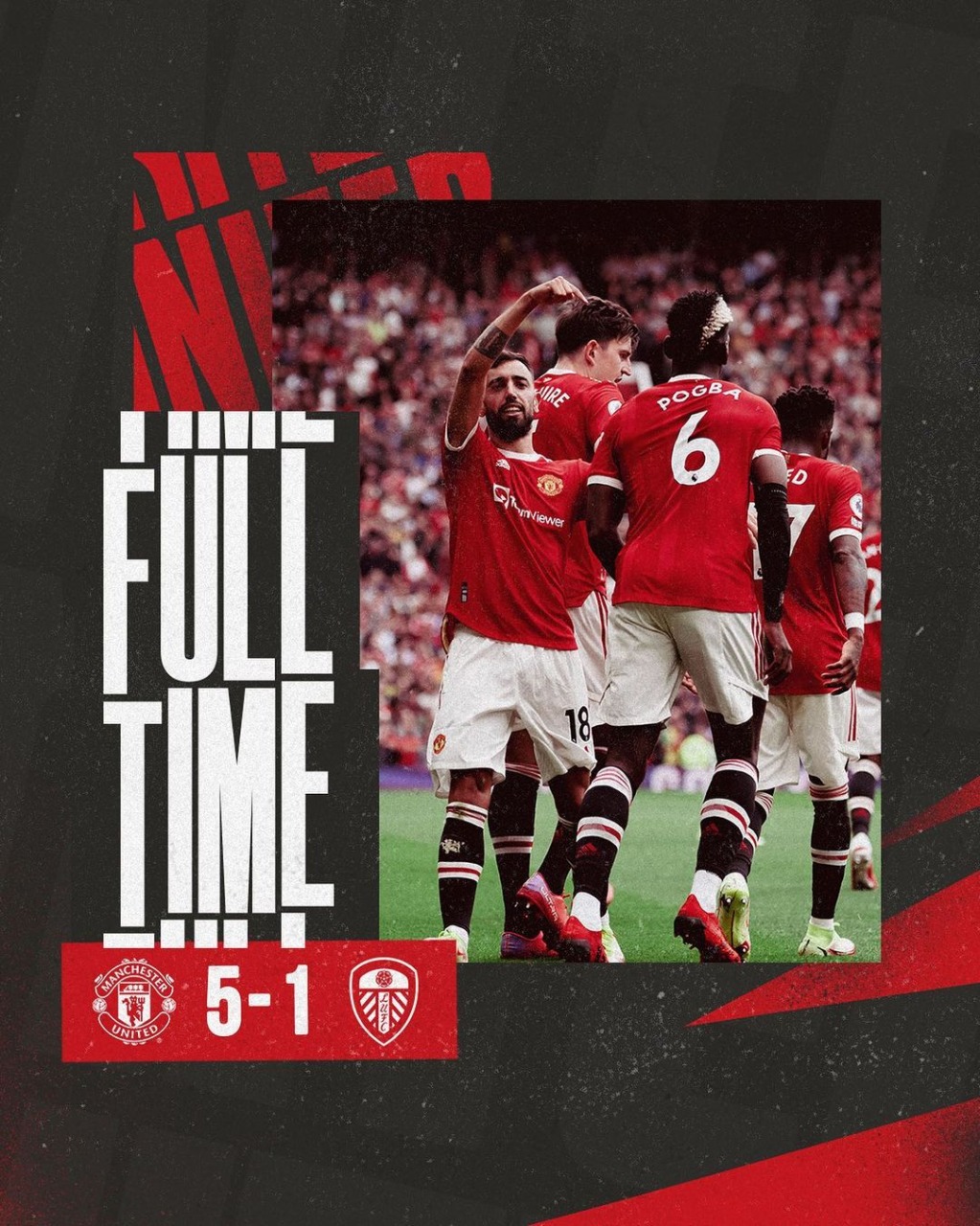 The Portugal midfielder opened the scoring on the half-hour mark at a packed Old Trafford, but Luke Ayling’s thunderous strike drew Leeds level early in the second half.

Mason Greenwood restored the hosts’ lead with a crisp finish less than two minutes later before Fernandes’ low shot was ruled to have crossed the line by referee Paul Tierney after a check of goalline technology.

The 26-year-old quickly completed his hat-trick with a thumping finish from Victor Lindelof’s pass, before Fred added United’s fourth goal in 14 minutes from Paul Pogba’s cross – the Frenchman’s fourth assist of the afternoon.

It was Fernandes’ first hat-trick since he moved to Old Trafford in January 2020 and only the second by a Red Devils player since Robin van Persie’s title-winning effort against Aston Villa in 2013.

But the game was also a personal triumph for Pogba.

The France midfielder’s future has been the subject of intense debate as he enters the final year of his contract.

But his four assists included a sublime pass for Greenwood’s goal, and he left the field to a standing ovation 15 minutes from time as £74m new-boy Jadon Sancho was introduced for his debut.

Fernandes’ last hat-trick was for Sporting Lisbon in an 8-1 hammering of Belenenses in front of just over 5,000 in May 2019.

Although the Portuguese have assumed hero status since moving to England, this was only the fourth time he had played a Premier League game in front of a capacity crowd at Old Trafford.

After a disappointing Euro 2020, any concerns about his impact at the domestic level have been completely dispelled.

His opener was excellent as he ran on to Pogba’s first-time pass, controlled a bouncing ball in the Leeds area, then put enough power into his shot to take it into the net despite Illan Meslier’s half-save.

Another Pogba pass offered Fernandes the opportunity to sit Meslier on his backside as he turned sharply before hitting a low shot goalwards that referee Tierney was correctly informed had crossed the line before Ayling cleared.

Fernandes’ third was route one. Lindelof’s pass fell perfectly for the forward, who allowed the ball to bounce before crashing it into the net.

It meant he followed Anthony Martial as the only Manchester United player to score a Premier League hat-trick since Van Persie – and the first to do it in front of fans.

The volume for an already noisy crowd was turned up another notch by Raphael Varane’s introduction just before the teams emerged.

Manchester United’s new £34m defender will be tasked with bringing greater stability to a back four that, even here, looked shaky at times.

Skipper Harry Maguire was almost embarrassed in a foot race with Patrick Bamford which he started with a clear advantage and poor marking should have been exploited by Rodrigo, who was off target with his header after being allowed to meet Raphinha’s curling free-kick unopposed.

For a team whose league record at Old Trafford is poor – Leeds have not won here since 1981 – and who conceded six in the corresponding fixture last season, it did not bode well.

Ayling did offer some hope when he was afforded far too much space to shoot – presumably, on the basis, he had never previously scored a Premier League goal – and promptly found the corner from 25 yards.

But it was only the prelude to a Manchester United onslaught from which there was no chance of recovery.

In this article:Manchester United 5 - 1 Leeds