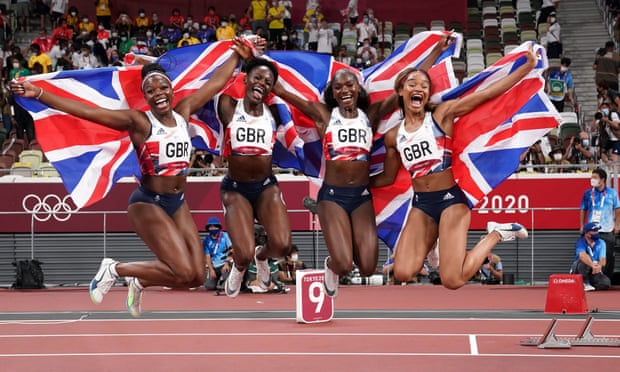 The UK Athletics head coach, Christian Malcolm, has defended his team’s performance at the Tokyo Olympics after they failed to win a single gold medal for the first time since Atlanta in 1996.

Malcolm, who took over last year, admitted there had been some “up and downs” in Japan, as the team fell just short of an informal medal target of seven to nine. However, he insisted Britain’s crop of young athletes would put things right for Paris in 2024.

“Obviously, we’re going to sit down and review and have a look,” he said. “I think the great thing about it is we’ve shown we have some real athletes with a real pedigree for the future,” he said. Asked about injuries to Dina Asher-Smith and Katarina Johnson-Thompson, which had potentially robbed his team of more medals, Malcolm added: “It’s a sport in its purest form and you’re always on that knife edge. And niggles and injuries can come when you’re trying to push to be the best you can.”

However, in a stinging rebuke Ed Warner, chair of UK Athletics during “Super Saturday” in 2012, said that the medal table made for “dismal reading”. “The last time GB came away from a Games without a gold medal was 1996,” he said. “Twenty-fourth place overall is grim and compares with third, eighth, fourth and sixth over the past four games. Even if Nethaneel Mitchell-Blake had held on for gold in the sprint relay, Britain would have bumped up to only 13th spot.”

Warner also took a swipe at the current leadership of UK Athletics, including the chief executive, Joanna Coates, and the interim chair, Nic Coward, pointing out they had been highly critical of the system they had inherited – yet had so far produced worse results.

He also said the performance director, Sara Symington, and Malcolm needed to step up, adding: “The early signs are not too good. If noises emanating from within the athlete and coach community in recent months are anything to go by, these two cohorts are missing the focus, drive and experience embodied by the two previous head coaches, Charles van Commenee and the late and much-missed Neil Black, who also doubled up as performance director.”

Malcolm brushed off Warner’s criticisms, saying: “That’s Ed’s opinion. If in two or three years’ time things are different and we have 12 gold medals and six silvers, they’re going to say: ‘OK, he’s done a great job.’ If you come back, we have zero, ‘OK, then he did a bad job’.”

The United States track and field team can no longer rely on sheer strength in depth after a “dramatic underperformance” at the Tokyo Olympics says athletics great Michael Johnson.

The United States won seven athletics golds, more than any other nation but almost half the 13 they picked up five years ago in Rio. read more

In this article:Tokyo Olympics, UK Athletics