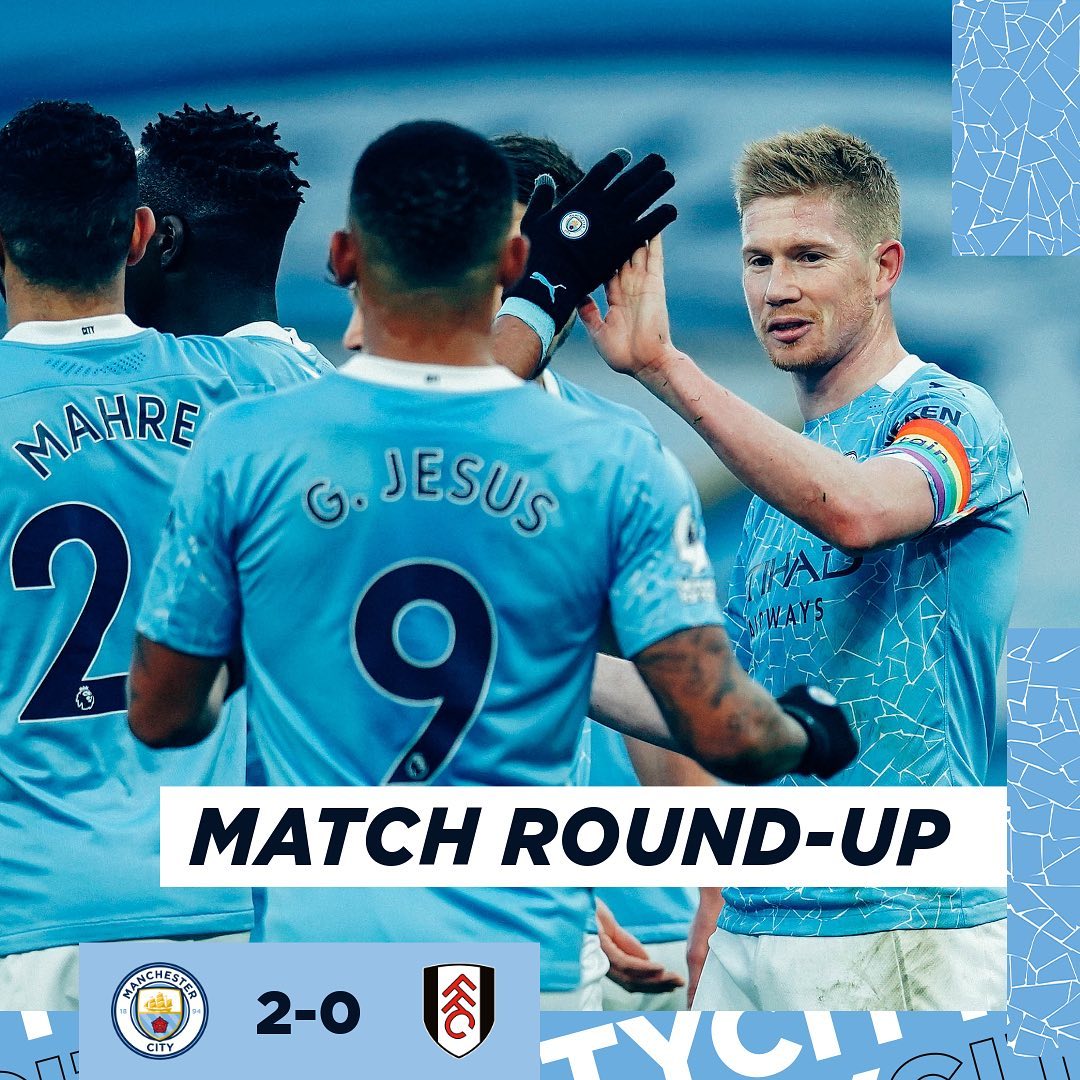 Sterling scores as City beat in trouble Fulham. Pep Guardiola’s side recorded their now annual 5-0 home win over Burnley last weekend and were similarly dominant, albeit a bit wasteful against the Cottagers to move three points behind league-leaders Tottenham.

Manchester City continued their return to form with another one-sided home win, outclassing Fulham to move up to fourth in the Premier League table.

Raheem Sterling and Kevin de Bruyne laid the platform for the win, with the latter setting up the former to slot in the opening goal. The roles were then reversed with the England winger tripped in the box by Joachim Andersen to allow the Belgian midfielder to score from the penalty spot.

The pair could easily have had another four goals between them but Fulham goalkeeper Alphonse Areola made a string of good saves, while De Bruyne also struck the bar with a shot.

It is the first time this campaign that City have won back-to-back league matches and it lifts them to a spot in the table more in keeping of a side with title aspirations. Fulham spent most of the game repelling attacks, but at least tried to ask questions of the home side, as they did to far greater effect at Leicester on Monday.

An eighth defeat of the season means the Cottagers remain 17th in the table, one point better off than West Brom and Burnley, both of whom have played a game less.

Pep reaches 700 as City make their move
This was City boss Pep Guardiola’s 700th game as a manager, during which he has won 29 major trophies in 11 seasons, including two Premier League titles with City.

Their inconsistent form in the early stages of this campaign has prompted some to question whether they are capable of reclaiming the English top-flight crown, which they relinquished to Liverpool last season.

The critics may not be entirely won over by successive victories over such vastly inferior opposition as Burnley and Fulham, but they cannot deny the ease with which they were dispatched.

Nor can they ignore the small signs of that confident swagger returning to City’s play nor the ominous stamping of authority on both games by De Bruyne, who scored his first league goal since the opening day win over Wolves and made it 14 assists in 2020 – more than any other Premier League player.

City weren’t perfect – this should have at least matched the scoreline against Burnley – and there are bigger challenges to come, not least of all at Manchester United in their next league fixture, but with some stars rediscovering their form and Sergio Aguero reportedly soon to return from injury, another title challenge from Guardiola’s side is well under way.

As for Fulham, you could forgive them for viewing this as something of a free hit, especially after having claimed a morale-boosting second win of the season earlier in the week.

Their season was never going to be defined by a fixture against an opponent who have now beaten them 10 times in a row by an aggregate of 29-3.

They failed to produce a meaningful effort at goal bar a couple of speculative Ivan Cavaleiro shots, but will be pleased at the determination and discipline they showed in not crumbling after Sterling’s early opener.

Things don’t get any easier for Scott Parker’s side, though. Up next: champions Liverpool.

Guardiola with a 72% win percentage