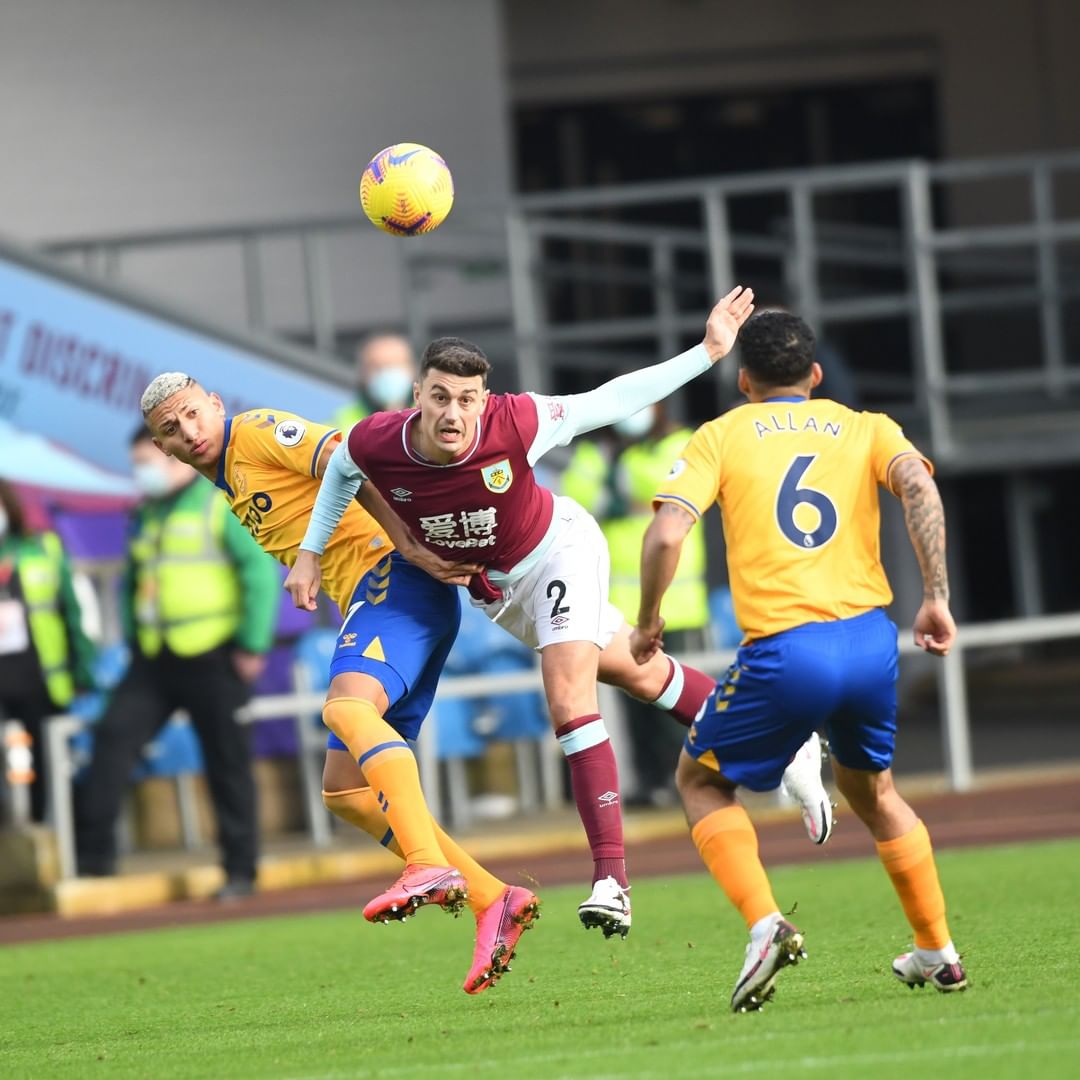 Dominic Calvert-Lewin scores his 11th goal as Everton drew 1-all with Burnley. The hosts made a lightning start, Robbie Brady’s strike from outside the box giving them the lead in the third minute. Burnley and Everton shared the points in an entertaining Premier League arm-wrestle at Turf Moor.

Everton were vulnerable, but improved after an injury to Fabian Delph forced them into a reshuffle midway through the first half. They equalised just before the breakthrough Dominic Calvert-Lewin, the Premier League’s leading scorer this season.

Both sides had chances to win it, only for goalkeepers Jordan Pickford and Nick Pope, the men vying for the England number one shirt, to shine in front of the watching Gareth Southgate.

Burnley stay in the bottom three, a point behind 17th-placed Fulham, who play Manchester City at 15:00 GMT on Saturday. The Clarets will have a game in hand on the majority of the league by the end of the weekend.

Everton are seventh, four points behind leaders Tottenham, although the Toffees could slide into the bottom half depending on other results.

Everton make virtue of necessity
Curiously, this game turned on a moment of misfortune for Delph, with the resulting Everton reshuffle actually benefiting the Toffees.

Deployed at left wing-back for just his second league start of the season, Delph lasted only 27 minutes before being forced off with an injury to his troublesome hamstring.

Instead of replacing like-for-like, Everton introduced Andre Gomes into their midfield and switched to a flat back four.

Whereas before Allan and Abdoulaye Doucoure were being overrun, the extra body gave the visitors a foothold in the middle. It was the previously poor Allan’s intervention that set Everton on their way to the equaliser, though Burnley felt he fouled Ashley Westwood to win the ball.

From then on, Everton always looked the more likely to win it, even if Pickford was forced into excellent saves from Chris Wood and Ben Mee.

Burnley’s growing shoots of recovery
Burnley remain in the relegation zone, but this result represents a further advance on a wretched start to the season that saw them take one point from six matches. They have now lost just one one in four, and there was no disgrace in an injury-hit team being well beaten at Manchester City last time out.

They flew out of the blocks, harrying to regain possession high up the field, with Westwood winning the ball for Brady to lash in his first goal in more than a year. Even after that, Burnley pressed, their full-backs happy to push on, only for Everton to establish themselves after the Delph injury.

There were periods of the second half when Burnley saw most of the ball, but it was Everton who had more time in the ascendancy. However, the hosts remained solid, were well worth their point and may have had more had Pickford not been sharp.

Everton fail to land knockout blow
After a stellar start to the season, Everton arrived in Lancashire with four defeats in their previous five games.

More pain looked likely in a disjointed start, only for the enforced reshuffle to not only stiffen their midfield but also release the creativity of Richarlison and James Rodriguez.

In Calvert-Lewin, they possess a potent threat – the England striker was lively even before he slid in to meet Richarlison’s cross for his 11th league goal of the season.

Everton had spells of pressure in the second half, a goalmouth scramble, a curling effort from Rodriguez and a late strike by substitute Gylfi Sigurdsson. Like his opposite number, the dependable Pope was only to be beaten once.