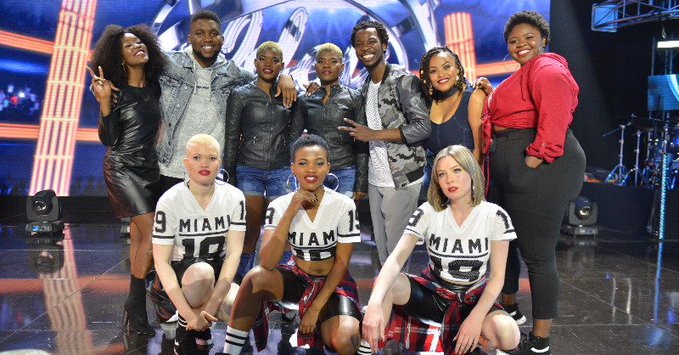 In the past two weeks, Group A and Group B gave their best to try and survive the final elimination. Like in any competition, someone has to leave. In the tradition of Idols, this is where a significant cut is made. South Africa voted for their favourite, bringing them one step closer to being crowned Idols SA Season 15 winner.

Proverb opened the show by acknowledging and paying respect to Randall Abrahams who has been part of Idols SA from Season 2  and is thus celebrating well over 15 years with the show. Checkout our run-down of some of Randall’s most unforgettable moments on Idols right here. Somizi also recognised Proverb’s decade-long milestone as host of Mzansi’s favourite music show and of course, we just had to take a trip down memory lane and relive some of the highlights of Pro’s Idols journey too.

The Top 17 and Proverb opened the show by singing an energetic and soulful rendition of Aretha Franklin’s ‘Respect’, reminding everyone to show each other respect. This was followed by a guest performance by multiple Grammy Award winning group, LadySmith Black Mmabazo alongside Idols’ judge Unathi. Soon after our hopefuls from Group A put State Theatre in a frenzy with their performance of ‘Giant’ by Calvin Harris and Rag’n’Bone Man with Group B matching their spirited effort and getting the audience on their feet to Ciara’s ‘Level Up’.

Idols SA Season 13 winner, Paxton teamed up Tresor, gracing the stage with a picturesque performance of her latest single, ‘Kiss The Haze’ followed by the world renowned, R&B superstar, Syleena Johnson, who inspired us all and made us pause and reflect on the times with her very relevant single, ‘Woman’.

The first hopefuls to learn they had missed out on a safe spot from Group A were Sizwe Hlatshwayo, Louise Nichols, Xola Toto, and Andy Keys. On the other end, Virginia Qwabe, Viggy Qwabe, Nolo Seodisha, Mmangaliso Gumbi, and Dinky Kunene rushed to their Ford seats backstage claiming the first five spots! The anxiety was palpable so we appreciated having Shado M take to stage singing her feel-good, 2019 hit, ‘Inhliziyo Yami ithi Hey‘!

Joining the first five from Group B were Nqobile Gumede, Sneziey Msomi, Micayla Oelofse and Luyolo Yiba meaning Zia Fielies, Treasure Mngadi, Innocentia Sibi and Craig Jordaan had to wait till the end of the show to learn if they’d get the last spot available. Before long, it was down to the final moment with Pro revealing that the Wild Card battle would be between Xola Toto and Innocentia Sibi. The latter had the highest votes making her the last hopeful to make the Top 10 meaning Xola and seven other hopefuls were officially out of the running.

From next week, the race to crown Mzansi’s next Idol continues as our hopefuls mash it up on stage again to get one step closer to glory!

Simmy burst onto the music scene with her awesome energy and star-quality talent and has become a rising celeb in no time at all. Read more

In this article:IdolsSA, Meet your Season 15 Top 10, Top 10 on IdolsSA