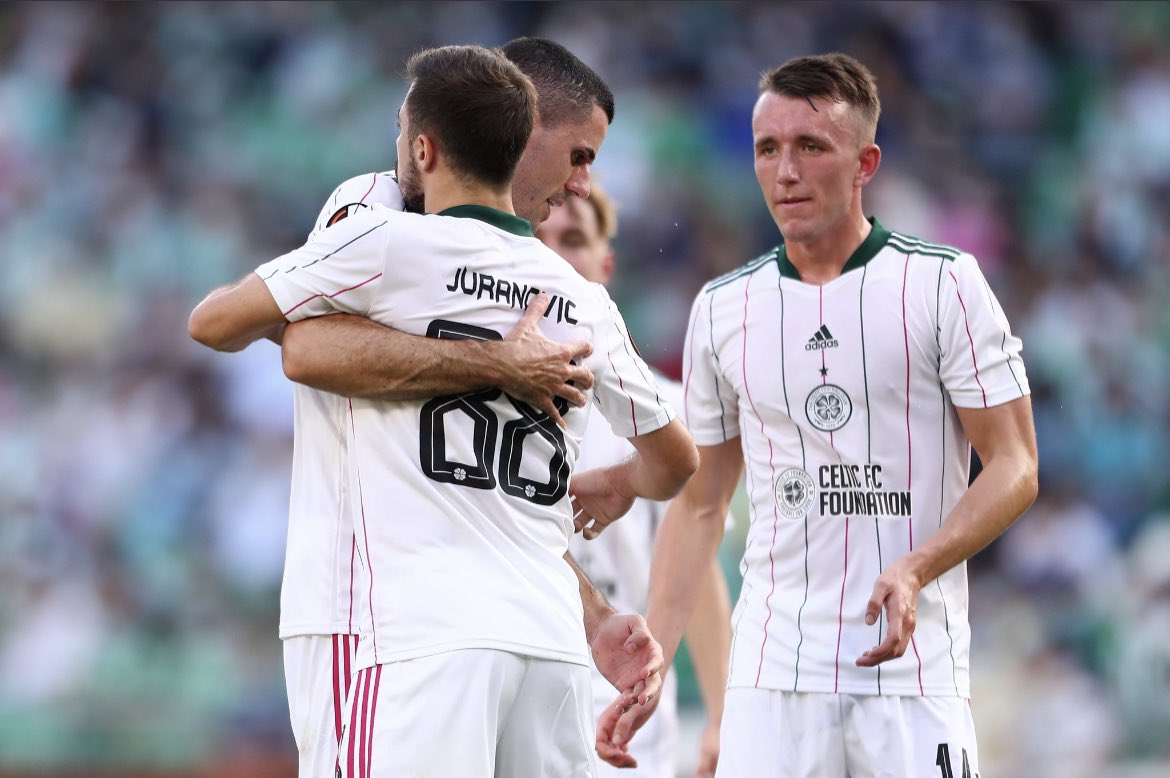 Makeshift Celtic let a two-goal lead slip as they fell to defeat against Real Betis in a Europa League thriller.

The visitors – back in Seville 18 years on from Uefa Cup final defeat – roared ahead with an Albian Ajeti finish and Josip Juranovic penalty, with Jota missing a golden chance for a third.

It proved pivotal as Juanmi’s double helped Betis turn the tie with a four-goal blitz in 21 minutes.

Anthony Ralston netted a late header but Celtic could not find a leveller.

Juan Miranda and Bruno Iglesias contributed Betis’ other goals as defeat in the opening game leave Celtic third in Group G after Bayer Leverkusen fought back to beat Ferencvaros 2-1 in Germany.

While Celtic took 80,000-strong travelling support to Sevilla in 2003, they had to go it alone in the Estadio Benito Villamarin with away fans not permitted.

Celtic have never won in Spain – a 59-year stretch that stood at 19 games – and their prospects were hampered by a lengthy absentee list headed by captain Callum McGregor and Japanese striker Kyogo Furuhashi.

Yet Ange Postecolgou’s men silenced the locals with a terrific start underlined by two excellent counter-attacking goals before Betis preyed on familiar defensive vulnerabilities in a compelling contest.

Jota almost scampered on to a defence-splitting pass in the opening minutes before teeing up the opener with a cross to Ajeti after a flowing move involving Tom Rogic and David Turnbull.

The ball went in off Ajeti’s chest and, after initially being disallowed for handball, the decision was correctly overturned following a lengthy VAR check.

Joe Hart preserved the lead, leaping to his right to palm away an Andres Guardado header before thwarting the lively Nabil Fekir at the near post.

But Celtic pounced with another piercing counter involving Rogic and Turnbull, whose pass sent Ajeti darting into the box. Former Manchester City goalkeeper Claudio Bravo led with his legs in attempting to save, taking out the striker, and Juranovic’s thumping penalty compounded the goalkeeper’s mistake.

Celtic were in dreamland – and should have stretched their lead to 3-0 before the half-hour mark but Jota’s dinked finish was clawed away by Bravo.

Betis capitalised on the let-off by wiping out Celtic’s lead with two goals in two minutes. Miranda – having rattled the base of the post moments earlier – linked neatly with Fekir to stab a shot past Hart.

Cameron Carter-Vickers was then caught out trying to play Iglesias offside as the striker latched on to Joaquin’s through ball and squared for Juanmi to tap into the empty net.

The turnaround was complete early in the second half as Betis again struck twice in quick succession, with Sergio Canales given far too much space on the left flank to pick out a cross that Iglesias flicked past Hart into the bottom corner.

Juanmi netted his second when he took down Turnbull’s clearing header and redirected it in off the post with a precise half-volley.

It looked a damage limitation job for the visitors, but they regained momentum to put Manuel Pellegrini’s side on edge.

Ajeti had a header ruled out for offside, and Rogic smacked a shot off the post before Ralston powered home a header from Turnbull’s delivery as Celtic went down fighting in another painful defeat in Seville.

In this article:Real Betis 4 - 3 Celtic