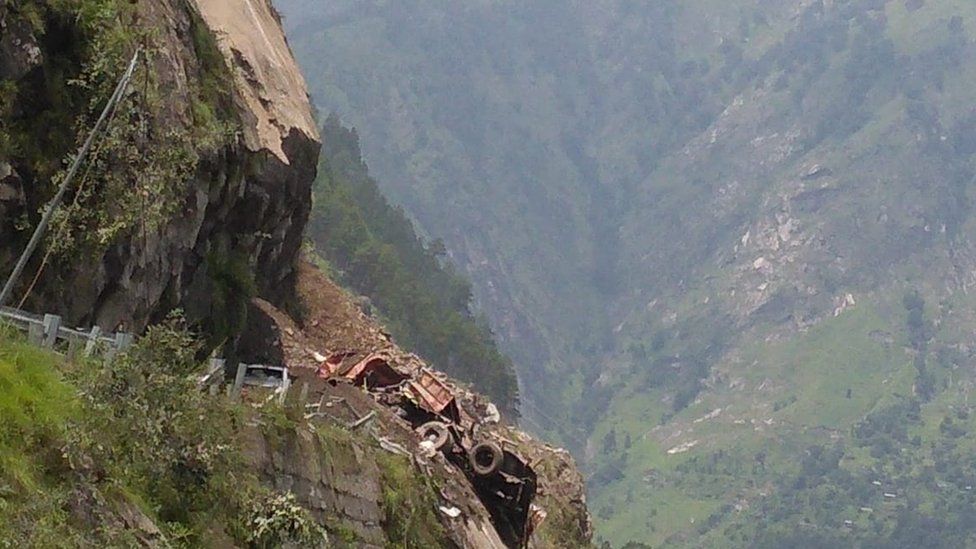 Rescuers were working to clear tonnes of rocks and mud Wednesday after a landslide buried about 60 people in India’s Himalayan north, killing at least 10.

A bus carrying between 20 and 25 people had been buried under rubble, said the Indo-Tibetan Border Police (ITBP), which is involved in the rescue efforts.

“A total of 10 dead bodies have been retrieved from the spot. Fourteen injured have been rescued,” the ITBP said in a statement.

A local police official at the site, which is in Himachal Pradesh state’s Kinnaur district, bordering Tibet, told AFP that rocks were still falling in the area.

The 14 rescued people had injuries “but should be okay after treatment”, the official added.

Television channels showed images of a truck and cars mangled and half-buried in the debris as well as slabs of rock and bits of the tree on a road.

“The bus, which was reported under the rubble, is visible now. Earthmover machines are clearing the debris. It will take one to two hours to reach the bus,” the ITBP said in an update from the rescue site.

A statement from Himachal Pradesh chief minister Jairam Thakur’s office said “about 60 people are feared to be buried under the debris”.

The bus driver and conductor had been rescued, Thakur’s office said.

Landslides are common in India’s northern Himalayan region, particularly in the current monsoon season when heavy rains lead to subsidence of earth and rocks.

The situation is exacerbated by climate change making the monsoon more erratic and melting glaciers higher in the mountains. Roads in the region are also often poorly maintained.