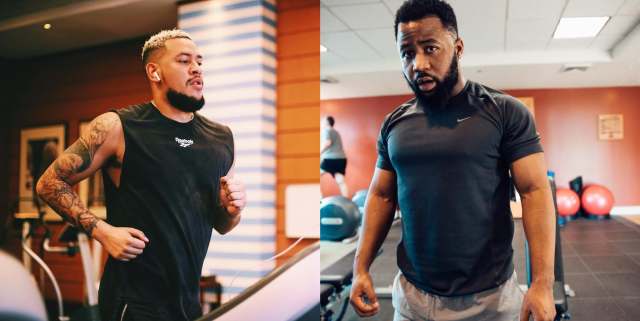 As 2020 draws to an end, Cassper Nyovest seems to be patiently waiting to enter the boxing ring with AKA next year.

In case you missed it, in the early days of lockdown Supa Mega revealed that the boxing match was set to happen between him and Mufasa.

However, due to a contract dispute it was up in the air. The “Energy“ rapper then flung several insults Cassper’s way, including calling him a moffie – which he apologised for after getting backlash from the LGBTQI+ community – and swearing at his parents.

After a constant online back and forth, the arch-rivals seemed to have reached an agreement as AKA confirmed the bout is set to take place in May 2021, during his interview with Ebro Darden on Apple Music.

Taking to Twitter this week, the “Hlengiwe” rapper shared about his love for boxing and saying that he enjoys it as much as rap or dancing.

He also threw a slight jab at AKA and said: “I improve by the day and I can’t wait to get in the ring with small boy. That’s if he doesn’t run.”

Ending his tweet by saying all the smack talk the “Heavy Drank“ rapper has done is going to cause him a lot of pain.

Yo!!! I really really love boxing!!! Like, I found something that I love just as much as rap and dance. I improve by the day and I can’t wait to get in the ring with small boy. That’s if he doesn’t run. All that talk over the years is about to cost you a lotta pain boy. SIGN!!!

Recently, Cassper also came to the defence of DJ Lag following the drama around the song “Culture“ by Megan Ryte featuring will.I.am and A$AP Ferg, which faced accusations of plagiarism and song theft. Following the backlash, will.I.am issued an apology.

The “Friday Night” hit-maker weighed in on the matter, echoing many fellow South Africans’ sentiments regarding fixing the song credits and compensating DJ Lag for the use of his beat.

Cassper said: “What about the Coins and the credit on the song? How about a young Black Eyed Peas record produced by Dj Lag ? What happens now king

Sharing a video dancing to Chris Brown feat. Drake – No Guidance, the actor showed us his dancing moves for December. He captioned the post: “#WeKnowWeCantDance #CumOnWitItSK.” That wasn’t all he also danced to Usher’s – Bad Habits. Learn more