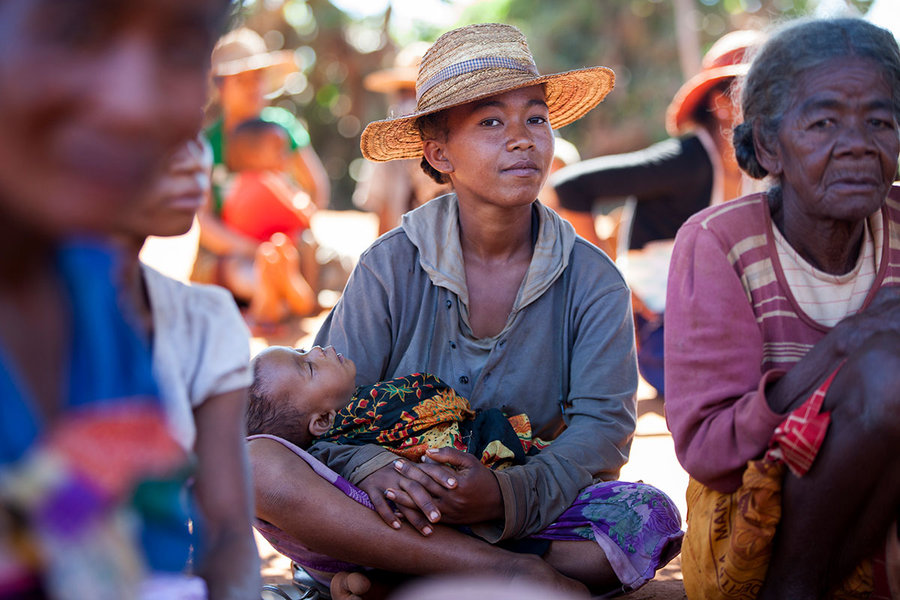 In the drought-ravaged south of Madagascar, people are filling their bellies with white clay mixed with tamarind to cope with famine.

“We call it survival soil because it allows the acidic taste of tamarind to seep into our mouths, which staves off hunger,” said Doday Fandilava Noelisona, a 35-year-old farmer in the village of Fenoaivo.

These days we no longer look for food to live on, but for ways to fill the empty stomachs,” said the father of six.

The staple food in the arid region is usually cactus fruit.

But after more than a year without rain, even the cacti have stopped producing fruit.

The rare sight of their wilted skin attests to the gruelling conditions prevailing in the region, around 100 kilometres (62 miles) west of the city of Fort-Dauphin.

In Fenoaivo, villagers dread a repeat of a terrible drought that killed hundreds in the 1990s.
We called it the era of scattered skeletons because they were all over the roads. People no longer had enough energy to bury the remains of their brothers and sisters,” recalled Avianay Idamy, 42.

To prevent a similar misfortune befalling his family, Idamy started eking out a living by selling firewood and charcoal.

The father of nine acknowledged the trade was “not the most sensible” for the environment, but said it allowed him to buy food for his family.
Usually I cultivate alluvial land on river banks, but there is no ran and nothing grows,” Idamy told AFP.

“I had also invested my savings in livestock to sell if needed but bandits stole everything from us this year, even our kitchen utensils,” he added.

Idamy sells his charcoal for the equivalent of 30 US cents (25 euro centimes) a bag, just enough for his family to eat cassava once a day.

Like their neighbours, they swallow clay mixed with tamarind between meals.

Nine people starved to death in the nearby village of Ankilomarovahetsy in September, about 10 kilometres (6.2 miles) away.

“Eight children and a mother,” said 65-year-old Rafanampy, the community leader, who did not give his surname.

“My son died after two days of illness, I couldn’t take him to see a doctor,” she said.

Half of the population in the southern region of the Indian Ocean island — 1.5 million people — is currently in need of emergency food aid, according to WFP.

Around 31 million euros ($37.6 million) are urgently needed to feed the hungry.

A few kilometres (miles) away in the town of Beraketa, global charity Action Against Hunger (ACF) has set up shop in coordination with the WFP.

“Child malnutrition here is cyclical,” and this year it started earlier in October instead of January, said ACF’s head of nutrition, Annick Rakotoanosy.

The centre attends to around 50 severely malnourished children — swollen bellies and lean legs — and 100 other patients each week.

The children are at risk of death, especially if malnutrition is complicated by diarrhoea, respiratory infections or malaria.

While droughts are not uncommon in the area, this dry spell has been compounded by climate impact.

“For three years in some communities, two in others, there has been no rain,” said the WFP’s Mbainaissem.

“The whole north of Amboasary (district), for example, is deprived of it,” Mbainaissem deplored.

Madagascar’s government has deployed the military to distribute food and first aid in the area.

Early in October, President Andry Rajoelina, his wife and son doled out rations in villages.

Without emergency food assistance, “we are facing disaster”, Mbainaissem warned. Now even tamarind is starting to become scarce.

Youtuber and influencer Lasizwe Dambuza touched down in Cape Town recently and for his stay, he wanted to navigate the beautiful city in style. Learn more