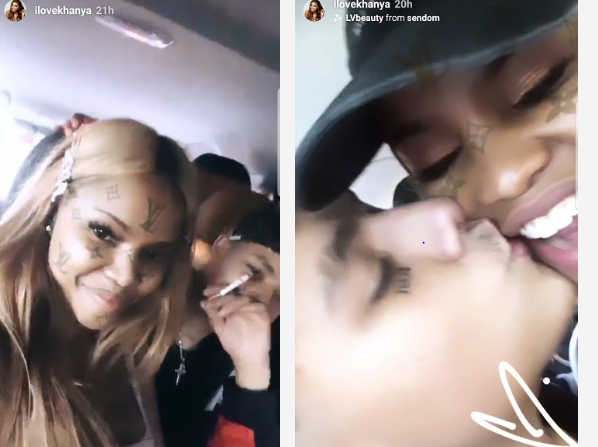 Singer J Molley opens up about his relationship with actress Khanya Mkangisa. After celebrating her 31st birthday she posted pictures and videos of her and J Molley kissing and all over each other. She got slammed because Molley was 21 at the time, making her 10 years older than him. Social media had a lot to say especially looking at the fact that Molley had broken up with his ex-girlfriend Shamiso, daughter of Azania Mosaka a few days before the pictures went viral.

Model and actress Khanya Mkangisa and up and coming rapper J Molley made headlines when pictures of the two all cosy went viral. Social media came after the two of them and it is safe to say they were not in favour of the alleged relationship. Reason being the age difference.

Instead of Khanya denying the claims she shoved the middle finger to everyone who talked negatively about the two of them. Now, the Leader Of The Wave rapper has finally spoken out about the alleged relationship saying there was nothing going on between them. The rapper revealed that before the pictures of him and the actress first came out, he had no idea who the Muvhango actress was. He then added that Khanya was the one who approached him backstage to take pictures at a show.

Molley then found out the next day how much influence she had as social media went berserk at the assumption that they were an item. He was even baffled at the fact that she is a celebrity with a fairly large following.

“I didn’t know her, I’ve never met her until that night,” he claimed. The rapper let the whole debacle continue because it worked well in his favour and it was good for his career. At the time these claims were made, he was pushing his latest project so that is why he let everything slide as it served as free publicity.

But as he addressed these rumours he expressed huge disappointment at the way social media makes up stories without considering people’s feelings. Their ‘fling’ was quickly forgotten after Molley posted pictures of his new bae and things already looked serious. He posted pictures of her and what looks like a tattoo of his initials.

Also, the fact assumption that Khanya Mkangisa and Matli Mohapeloa seem to have reckinled their love after the actor posted a picture of them together, made people forget about Molley. Matli captioned the picture with a heart emoji.

In other news – Shauwn Mkhize opens up: Material things can never give you peace

The wealthy businesswoman and reality TV star has taken to social media to send a sincere and profound message to her fans, talking about her journey to self-discovery…Learn More.