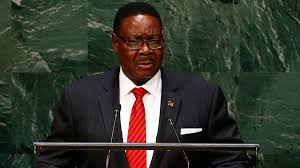 Mutharika approached the courts in an attempt to have the Anti-Corruption Bureau (ACB) unfreeze his bank accounts.
News website Nyasa Times reported that ACB director-general Reyneck Matemba told a news conference in the capital city Lilongwe last Thursday that Mutharika had sued the anti-corruption body.

The ACB froze the personal bank accounts of Mutharika and his wife, Gertrude, in August when it started investigating Mutharika in the 5-billion kwacha (about US$6.6 million) cement scandal where his tax number was allegedly used to import bags of cement duty-free between 2018 and 2019. The cement was imported from Zimbabwe and Zambia.

In terms of the Presidents (Salaries and Benefits) Act, the president has the privilege to import items for personal use, duty-free.

Another news website, Malawi24, reported that Mutharika wanted access to his money, but the ACB had refused.

“We received an appeal to let him access some money for general living, but we denied to do that since investigations are under way. We challenged him to go to court if he is against this and, yes, he has taken us to court,” Matemba told Malawi24.

According to the news website, two bank accounts were frozen – one is his personal bank account and other is a joint account with his wife. Mutharika has recently complained that he is struggling and is surviving by getting help from friends.

In July, his former bodyguard Norman Chisale was arrested in connection with the importation of duty-free cement. This was after a businessman, Mohammed Shafee Ahmed Chunara, who was alleged to have been involved in the cement scandal, implicated Chisale.

Former deputy commissioner-general of the Malawi Revenue Service Roza Mbilizi was also arrested for allegedly facilitating the importation of the cement.

In other news – Actress Natalie Desselle-Reid has died

Natalie Desselle-Reid has been pronounced dead yesterday, Monday 7 December at the age of 53. The star’s manager, Dolores Robinson made it known through her Instagram. Learn more