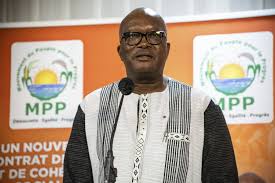 The ruling coalition of Burkina Faso President Roch Kabore, who was re-elected to a second term last week, has retained its majority in parliament, the electoral commission said on Sunday.

Kabore’s People’s Movement for Progress (MPP) and allied parties won about 90 of 127 seats in the Nov. 22 vote, official results showed.

The Congress for Democracy and Progress (CDP) party of former president Blaise Compaore, who was ousted from power by an uprising in 2014, has become the largest opposition party in parliament with 20 seats, according to the results.

Kabore was declared the provisional winner of the presidential election on Thursday, setting up a second term in which he will face familiar challenges, including battling Islamist groups that have made large areas of the country ungovernable.

In other news – Pic of Jub Jub with his daughter raises talks about his son, Christian

Jub Jub got brows raised and mouths busy on talks about his son with Kelly Khumalo named Christian. The trigger behind this was his latest post, which is a photo of a little girl kissing him on his forehead. Many gushed over the photo, but desired he could replicate the same with his son. Learn more